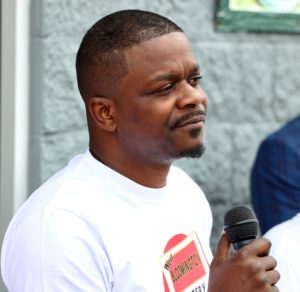 The United States Department of Agriculture (USDA) classified the West Bloomington area around West Market Street and Howard Street as a food desert, an area lacking in readily available nutritious food. The designation sparked Arthur Haynes and his team to start The West Market Street Council. The council consists of local businesses in the West Market and Howard Street area that are committed to the economic development of the area.

Haynes, the president of the council and an MCLP graduate, spoke about the council’s goals on how to develop the area. The plan is to construct The West Market Street Plaza which will include a non-profit grocery store and other retail shops. Their hope is to create a place that serves the community and revives the area from its food desert status.

The council’s journey, in Haynes’ words, “led to many discoveries that pointed to racial segregation and systemic racism, and how the two played a significant role in the community’s current state.” Their mission evolved from that point to reverse the damage done by the economic disinvestment and to build an economic structure that would benefit the local residents.

MCLP became a part of that mission when the council applied for an MCLP team to assist on the project. The team’s focus will be to increase community awareness of the food desert to garner community support for The West Market Street Council’s mission. Haynes and his team will face many challenges along the way but, when asked about how to make a difference in one’s community, Haynes said,

“to just do it. If it’s something you’re passionate about and truly believe in, just go for it! The universe will accompany your passions and see you through to the end. The most impactful thing that we as passionate beings could ever do, is believe in ourselves. That’s how you change the world.”

Haynes’ philosophy is “do something that means something,” and he and The West Market Street Council are doing something that will bring change to our community and will improve the lives of many who call Bloomington-Normal home.